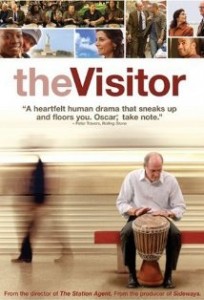 The movie The Visitor illuminates issues both personal and societal relating to undocumented immigrants in particular and the interweaving of cultures in general.  The film was screened one evening at NASJE’s 2010 Annual Conference in San Antonio.  On a following morning there was a facilitated discussion that included how to use the film as a training tool in judicial branch education and the basics that state court judges need to know regarding immigration issues.

Richard Jenkins was nominated for a Best Actor Oscar in 2009 for his performance as Professor Walter Vale, a disconnected man who has been sleepwalking through his life since his wife passed away.  When Walter visits his seldom-used New York City apartment, he encounters Tarek, a Syrian musician and Zainab, Tarek’s Senegalese girlfriend, living there.

Walter comes face to face with the physical reality of strangers in his home, with his own assumptions about people who are different from him, and with what happens when you broaden your worldview.  Just as Walter progresses into combining the old rhythms of his life with the new, Tarek is detained and threatened with deportation for being undocumented.  Walter’s perspective of the system changes dramatically when someone he cares about is entangled in it.

The first part of the facilitated discussion focused on the story and the characters, and on how this film and others might be used in judicial branch education sessions.  Issues included teaching with the full film vs. clips, how to keep the characters clear, dealing with potential inaccuracies in portrayals of the justice system, and having a backup plan for any technological difficulties.  Clips from The Visitor were shown throughout the discussion both to retain the emotional immediacy of the movie and for the benefit of those who hadn’t seen it.

The Visitor was written and directed by Thomas McCarthy, who also wrote and directed The Station Agent.  Music–drumming especially–infused the film with a compelling heartbeat that reflected both cultural differences and universal human rhythms.