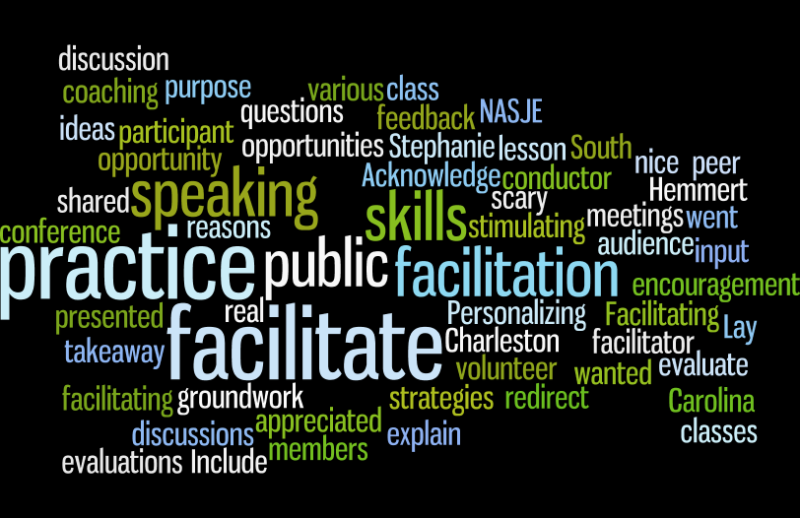 by Rob Godfrey, Utah Administrative Office of the Courts 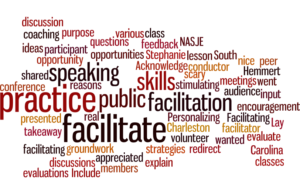 The final morning of the NASJE conference in Charleston, South Carolina began with the choice of one of three different breakout sessions. I chose to attend Facilitating 101 presented by Stephanie Hemmert of the Federal Judicial Center in Washington, DC. She began the session by drawing input from many in the audience, who shared various reasons why they wanted to facilitate classes, discussions and meetings. She then went on to explain that our purpose for the class was to practice our facilitating skills with the whole group. I chose to take a turn despite my fear of anything related to public speaking and found I appreciated the opportunity to put the lesson into real practice.

With 20 or so attendees we were given 3 minutes to choose a topic and facilitate a discussion. After session members took their turns, the rest of the class filled in comment cards answering several questions to evaluate the facilitation skills of each volunteer participant. Each volunteer received the peer evaluations for their personal use, a nice takeaway from the session. In between each person’s performance, Stephanie added ideas about how to steer groups toward desired outcomes. For example:

Stephanie provided other helpful hints, such as when you have a group that is shy to participate, ask “Who has the first question?” rather than just asking if there are any questions. Personalizing it can entice someone who may be on the verge of asking but might hesitate without some encouragement.

Participants discussed at length what to do with troublesome participants – those who try to dominate a room or display their intellectual prowess. Helpful hints included strategies such as physically remaining near the offending party so that his or her attention must stay with the facilitator. Another method is to ask for input from others, to steer the conversation gently away from the noise-making person.

I found the class to be very stimulating and even a little scary, since I don’t get opportunities to facilitate very often in my job. Like anything related to public speaking, it helps to practice as often as possible. The feedback I received from fellow learners was extremely helpful as well and one thing I will take away from this and apply to many other phases of my job and life: don’t forget to smile.