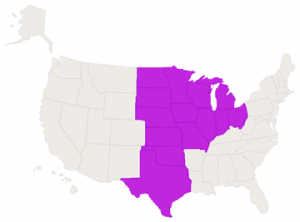 2. Regional Conference or Webinar 2011/2012?
a. Feedback received in prior survey by Lee Ann indicted that the group was not interested in a face to face meeting primarily due to travel restrictions.
b. The Western Region did hold a meeting in Spring, 2011. Melody stated that the regional conference she attended included judicial educators and court managers.
c. After agreeing that a webinar would be best, Milt recommended waiting until January to hold a webinar. Lee Ann will follow up on topics and seek a volunteer state to host.

3. NASJE 2014 Annual Conference (Midwest Host)
a. Lee Ann reported that the Midwest Region is scheduled to host the annual meeting in 2015. She suggested that the 2014 Annual Meeting be held in Ohio, in either Cleveland or Cincinnati.
b. Joyce asked if we will be partnering with NACM. Lee Ann said NACM will be in Scottsdale, AZ in 2014 and that there were no definite plans to partner again, but that the board is looking at partnerships with different organizations that have made inquiry. Joyce noted that NASJE attendance is getting smaller and likes the idea of partnering.
c. It was suggested to look at travel expenses of the suggested locations for 2014 and take that into consideration when making a decision. Lee Ann will host a post conference “Back to School” webinar in August – over lunch hour and solicit feedback at that time.

4. Sharing Successes and Requests for Support or Information

Ohio just held the Elder Statewide Summit. Steve Hanson is a good resource on this topic. Ohio is partnering with Ohio State University to evaluate effectiveness of education for Juvenile Court Judges. Ohio launched its online academy for judicial education this year. Registration and materials are now online and available to judges from other states. They are continuing efforts in curriculum development. Ohio’s Court Managers and Presiding Judges held a 2 day Mini CMP, which was very successful, and Ohio is offering a training series on New Americans, each program of which focuses on people from different national origins.

South Dakota’s Deputy Clerk education program on professional development and success planning has been very successful. It Includes books, books on tape, and articles. Karn is developing a Mentor Program for the entire judicial system that matches up anyone within the system based on an online assessment, rather than position within the court.

Texas – A symposium was held on “Leading into the Future: Securing the Public Trust in Texas Courts”. The South Texas Law Review dedicated its Summer 2010 Issue to the symposium. The symposium sessions may be reviewed online at Westlaw, LexisNexis and HeinOnline. The Texas Supreme Court has supported initiatives related to foster care and implicit bias. Continuing to work with Texas Department of Transportation to set up DWI Courts with grant funds to provide training for these courts.

Nebraska has done mostly distance learning during the past year, but is using grant funds to offer some in-person training. They will offer the 2012 Justice Conference (5 Tracks/5 Days), and Upcoming SJI training on Elder Abuse, and a DUI Seminar through Melody at the National Judicial College.

North Dakota is looking for faculty with expertise in Elder issues. A successful statewide multi-disciplinary conference dedicated to Juvenile Justice issues. Training on implicit bias has been developed and offered to judicial officers and staff

Iowa has worked on and is seeing increased support for education from the State Court Administrator’s office and progress with the state budget. They are currently working on developing curriculum-based courses.

National Judicial College – William promoted the upcoming web-based course for new judges, Taking the Bench. The course is designed to be a transition from Bar to Bench and included 4 Modules Online. It is expected to be active October 1, 2011. He said Human Trafficking for Judges will be offered December 2011 and that he wrote a proposal for Arkansas for faculty development. Melody said NJC has money and resources for traffic-related training. She mentioned the Commercial Drivers License faculty development program that is available and the In-State Traffic Programs offered in partnership with NHTSA.

5. Good of the Order – The next NASJE Annual Conference is scheduled for August 5-8, 2012 at the Seaport Hotel in Boston, Massachusetts.