In the session, Court Teams’ Decision-making , Langhorne asked participants to get rid of the old-fashioned thinking about group-think and to believe that groups generally generate better decisions in courts. A key to better decisions is understanding the personality traits of the group members. 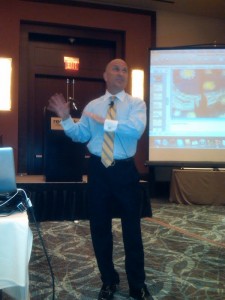 Participants in the session had been instructed to take the Myers-Briggs Type Indicator in advance and to remember their scores. Langhorne then explained how the various types (extroverts, introverts, sensing, intuitive, thinking, feeling, judging, and perceiving) influence decision-making. He said there is a strong connection between an individual’s personality and the logic they prefer to use.

Langhorne gave tips for working with each of the personality types and said groups that can learn to appreciate the differences will be better decision makers.

The session also looked at implications for logic and the differences between inductive (bottom up) and deductive (top down) reasoning. Langhorne said individuals should avoid common errors in logic and reasoning, including forming hasty conclusions based on implicit or explicit bias.

Using the short film The Lunch Date, Langhorne explored the role of bias in decision making. He said the most challenging thing decision makers must do on a daily basis is suspend judgment until they have sufficient information.

Bias in the courts can be eliminated by the following:

An online Myers-Brigg assessment can be found at here.