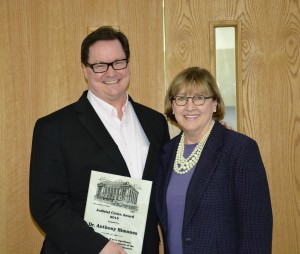 Dr. Simones worked extensively with the Supreme Court of Missouri’s Civic Education Committee in the six years he was with OSCA. This new position will allow him to focus exclusively on what he characterized as his “favorite part of the job.” “I had only been with OSCA for about a month when Judge Patricia Breckenridge of the Supreme Court, the Chair of the Civic Education Committee, asked me to be involved with her initiative,” Simones says. “What I didn’t realize at the time was that Judge Breckenridge was giving me the opportunity to lay the foundation for my dream job.”

In his new position, Dr. Simones will design, coordinate and deliver presentations and programming to Missourians about the necessity of a fair and impartial judiciary, the importance of the rule of law and the protection of civil liberties. He will also work with middle and high schools throughout Missouri to create and offer competitions designed to enhance students’ understanding of our constitutional system and to encourage their interest in, and involvement with, the system of justice.

“The Executive Director of the Missouri Bar, Sebrina Barrett, encouraged me to continue my involvement in the leadership of NASJE,” says Simones. A member of the NASJE Board of Directors for over three years, Dr. Simones is the current vice president of the organization.

“This new job will allow me to utilize my experience as a Professor of Constitutional Law, the work I have done with the Supreme Court of Missouri and what I have learned from NASJE,” Simones says. “In many ways, I have been preparing for this position for my entire professional career.”