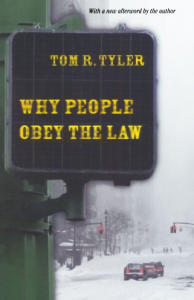 With funding from the Bureau of Justice Assistance of the U.S. Department of Justice, the Center for Court Innovation and The National Judicial College have launched the development and evaluation of a national demonstration project that will attempt to improve procedural justice in an urban criminal court setting.

The project was born out of research showing that litigants’ perceptions of procedural justice (the perceived fairness of the procedures they experience in the courthouse) exert more influence on their overall view of the justice system than distributive justice (the perceived fairness of the case outcome). The goal of the project is to translate the key principles of procedural justice into a training curriculum that will be administered in an urban criminal courtroom – aimed at improving staff’s verbal and non-verbal communication practices – then evaluate the impact of those changed practices on defendant perceptions of fairness.

To begin, project partners convened a working group of experts in January 2011 at the Center for Court Innovation’s headquarters in New York City. The group was comprised of judges, attorneys, court administrators, and communications and linguistics specialists from around the country, including

Over the course of the two-day meeting, the working group set out to tackle the following objectives: (1) to outline a set of best practices in improved courtroom communication, (2) to inform the development of a training curriculum, and (3) to recommend court sites and/or the size and types of courts that might be appropriate for pilot implementation.

(1) Outlining Best Practices
Toward the first objective, the discussion was organized around the key elements of procedural justice, developed in part by participant Tom Tyler – voice, respect, neutrality, understanding, and helpfulness. Participants sought to identify practical strategies by which criminal court judges and other courthouse staff can translate these principles into practice, both inside and outside of the courtroom.

In the courtroom, suggested strategies included starting court on time and calendaring cases according to case type, both to improve efficiency and to demonstrate respect for defendants’ time. The group also suggested that judges provide a brief introduction for the courtroom audience at the beginning of each court session — explaining the rules, format and purpose of the court proceedings. As part of this introduction, it was recommended that judges acknowledge their appreciation for everyone’s attendance and cooperation in getting through what can be a stressful experience. Simple and clear signs around the courthouse and courtroom can reinforce this message.

The working group then considered procedural justice strategies to implement during each defendant’s court appearance. It was recommended that cases be called clearly and loudly by name and that each defendant should be greeted by the judge. To ensure the defendant’s understanding, the judge should explain the purpose of the court appearance in plain language. Special consideration was given to defendants who are detained pre-trial.

The group addressed the role that defense attorneys can play in promoting defendant comprehension, as well as facilitating that each defendant’s voice is heard, without jeopardizing his/her legal rights. At the end of the proceeding, the group recommended that all defendants leave court with easy-to-understand written and oral instructions regarding the next steps in their case, including the date and purpose of their next court appearance, orders of protection, and/or conditions of probation or other court-mandated sanctions.

The working group stressed that the interactions among all courtroom staff – whether or not court is in session – are important to promoting procedural justice. Judges should be advised that admonishing attorneys or other courtroom staff in front of defendants and audience members may appear to demonstrate a lack of respect and/or neutrality. The group also recommended that the pilot training include as many courthouse staff as possible. In particular, the group stressed the importance of engaging security personnel in advancing procedural justice, as they are often the first staff with whom a defendant or audience member interacts at the courthouse.

(2) Curriculum Development
The working group also offered suggestions as to how the above content might be translated into a day-long curriculum, both for implementation at the pilot site and to be added to The National Judicial College’s general offerings. The working group proposed to start the training by grounding participants in the relevant social science research and debunking any myths. The two core recommendations for the training were developing listening skills and communication skills. It was suggested that participants evaluate themselves on these skills through a pre-training self-administered assessment and/or by observing a videotaping of their behavior in court. In addition to skills development, the training should focus on how participants can improve the appearance that they are listening and communicating effectively.

The working group recommended a range of learning activities to be used during the pilot training, such as role plays and simulations, ideally to take place in a courtroom setting. Pre- and post-course activities were recommended to extend the impact of the training.

(3) Pilot Site Selection
Finally, the working group helped to define the criteria for an appropriate pilot site. The starting criteria were that the court must hear criminal cases in an urban area that utilizes short-term sanctions (such as community service) for which compliance may be tracked during the grant period. The working group discussed the important balance of selecting a site where there was interest in reform but where widespread efforts to promote procedural justice had not yet been attempted. The group emphasized the importance of selecting a jurisdiction in which the administrative judge is fully supportive of the project – and can encourage the support of participants and other key players. They also advocated for a jurisdiction that is sufficiently large to have 10-20 criminal court judges.

In the weeks following the working group meeting, project staff have been working towards two major next steps: completing the curriculum and selecting a pilot site. The curriculum will be based largely on the findings of the working group, using 50-minute modules to address topics such as the role of procedural fairness in the court system, verbal communication, non-verbal communication, special populations, courthouse-wide issues, and implementing and measuring procedural fairness. The modular design of the curriculum will allow it to be presented as a full-day program, as individual modules, or in any combination that meets the educational requirements and time constraints of a particular educational setting. After the curriculum is piloted, the NJC plans to make the curriculum and supporting materials available to state judicial educators and court administrators for broader dissemination.

As for a pilot site, staff are working from a short list of possible criminal courts that meet the selection criteria. The pilot is scheduled to launch later this year.

The Center for Court Innovation is a non-profit think tank based in New York City that helps courts and criminal justice agencies aid victims, reduce crime and improve public trust in justice. For more information about this project, please contact Emily Gold, Senior Planner, at (646) 386-4468; golde@courtinnovation.org.

Emily Gold is the project manager for the Improving Courtroom Communication project. As a senior planner at the Center for Court Innovation, she is also on the planning team for a new community court geared toward young people to be located in Brownsville, Brooklyn. Before joining the Center for Court Innovation, she was a public defender in Manhattan.