Spoiler alert – here are the last words of my new book, Independence Corrupted / How America’s Judges Make Their Decisions (University of Wisconsin Press, 2018): 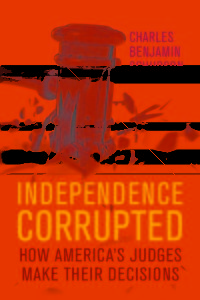 Judges, so strong, so fragile; independence, so vital and threatened. “Life,” Justice Holmes wrote, “is painting a picture, not doing a sum.” I wonder about that. But judicial life? That, I know – reason and compassion … many sums, and paintings, too.

It is a “memoired treatise” intended to be equally valuable for lay readers, college and law students, and judges. It is about law, of course, but also about American constitutional history and evolving concepts of “independence” and “corruption.” And, perhaps most poignantly, it is about the dynamics of judicial decision-making. As Professor Aine Donovan, former director of the Dartmouth College Ethics Institute, wrote, it “shows the difficult and often wrenching decision-making process that every judge must endure.”

Hopefully, it does so in a candid, respectful, sensitive, and scholarly manner that can be of significant value for America’s judges and judicial educators. Probing and exposing, it is painfully frank, and it explicitly considers judicial ethics codes and the ethical dilemma of offering such analysis.

In three years of researching and writing, I found Independence Corrupted carrying me back to judicial education experiences – classroom encounters, as both student and teacher. I write about them and organizations including the National Council of Juvenile and Family Court Judges, the National Judicial College, the National Center for State Courts, and NASJE. I conclude one of my chapters with these words:

During my more than thirty years of judicial service and teaching, I watched America’s judiciary change – from a dedicated but self-satisfied, lily-white group of good ol’ boys to a more diverse, enlightened, and sensitive assemblage. While some old problems persist, and while new ones emerge, America’s judges, now more than ever, constitute an enthusiastic student body, willing to question and ready to learn. Working with them has been among the most gratifying experiences of my life – a few bad apples, of course, but from Gala to Granny Smith, from Akane to Zestar, a delicious group.

And the lengthy footnote (fair warning: one of 399 footnotes) to that paragraph concludes, “Such superb [judicial education] programs make a difference, challenging America’s judges, improving their practices, and truly transforming some of their most important understandings.”

Writing this book, I had plenty of help – some of it from some of you. The pre-publication readers’ reactions to Independence Corrupted have been heartening; and the book has been nominated for the Chautauqua Prize, the ABA Silver Gavel Award, and the National Book Award.

In 1829, Chief Justice John Marshall declared, “[T]he greatest scourge an angry Heaven ever inflicted upon an ungrateful and a sinning people, was an ignorant, a corrupt, or a dependent judiciary.” Obviously, he wasn’t promoting my book but his words might do so now. Am I? You betcha – left on the shelves, it does no one any good; but in your hands, and taken to heart by our judges, it may join judicial educators in helping to protect America’s judiciaries against that “greatest scourge.”

Charles Benjamin Schudson, a Wisconsin Reserve Judge Emeritus and long-time NASJE member, served as a state and federal prosecutor, a trial and appellate judge, and as an adjunct professor of law at Marquette University and the University of Wisconsin. For many years, he served on the faculties of the National Council of Juvenile and Family Court Judges and the National Judicial College. He has taught at countless judicial colleges and conferences throughout America, and in recent years, served as a Fulbright Fellow teaching at law schools abroad. He also co-authored On Trial / America’s Courts and Their Treatment of Sexually Abused Children (Beacon Press, 1989; 2d ed., 1991).