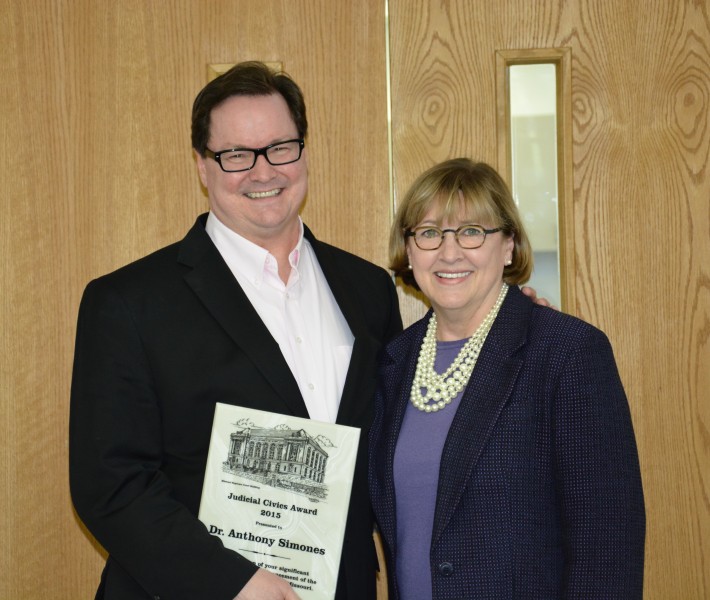 Chief Justice of the Supreme Court of Missouri, Patricia Breckenridge, presented NASJE member, Anthony Simones, with the Missouri Chief Justice’s Award for Judicial Civics on October 8, 2015 at the annual Missouri Judicial Conference. The award recognizes excellence and leadership in promoting education about the courts.

Dr. Simones is the Manager of Judicial Education for the state of Missouri and has been a member of NASJE since taking the position four years ago.

Commenting on his impact, Chief Justice Breckenridge stated: “When Dr. Simones joined the Office of State Courts Administrator he had been a professor at Dalton State College and was a nominee for both the Georgia Professor of the Year and the Carnegie Foundation U.S. Professor of the Year. Georgia’s loss is our gain. In just four short years, he has brought his enthusiasm to virtually every aspect of judicial education.”

Noting the specific initiatives of which he has been a part, Breckenridge observed: “Dr. Simones is a true ambassador for the judiciary. His development of the Court Management Institute and Judicial Leadership Conference reflects his genuine passion for the judicial system.”

“Tony also has the unique ability to engage any audience in learning,” Breckenridge noted. “An integral member of the Civic Education Review subcommittee, his creativity is evident in every presentation developed for use by members of the judiciary and educators.”

“Dr. Simones has been the heart and soul of the civic education effort and I am pleased to recognize his contribution today,” Breckenridge concluded.

“To be recognized in this manner is an extraordinary honor,” Dr. Simones said in response to the award. “But to receive it from Chief Justice Breckenridge, someone for whom I have such respect and admiration, someone who was the driving force behind the civic education initiative in this state, makes it especially meaningful.”