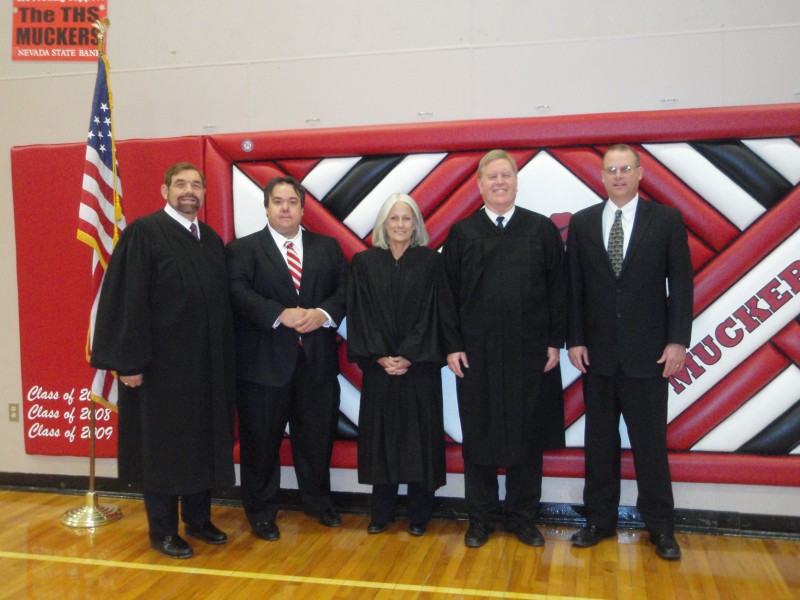 Since 2003, at the urging of Justice Mark Gibbons, the Nevada Supreme Court has been hearing cases at high schools throughout the state. Panels, usually made up of three of the seven Justices, have traveled to a number of rural areas, conducting hearings that usually have a connection to that specific region, in an effort to allow the general population and students to see how the court functions.

“I talked to my colleagues and said, ‘Wouldn’t it be great for high school students to see how courts work and explain how a Supreme Court is different than a Traffic Court?’,” Justice Gibbons said. “We figure it’s an encouragement to continue on with their education.

The court is run in a different fashion than it would be in Carson City. The Justices have allowed each attorney to explain their side of the case to the audience before proceeding with their arguments. The Justices also explain how the court functions, the court’s purpose, how they reach a decision, and what they write in their opinions for each case. Justices may also mold their questions to the local area or students, in order to add relevance to the questioning.

One high school government teacher told a local newspaper that she was excited to see the students actually able to process the curriculum first hand.

After a hearing at the Churchill County High School in Fallon, NV, the local paper ran an editorial stating, “This courtroom on wheels serves the citizens well by giving students and adults a better insight into the workings of the Nevada Supreme Court. We thank the justices for their contributions to the state and for enlightening our students and community on one aspect of the judicial system. Seeing a proceeding like this is definitely worth more than words in a textbook.”

Chief Justice Michael Cherry said, “The Nevada Supreme Court holds arguments at Nevada high schools for several reasons: to bring the court process to high school students helping bring civics and constitutional processes to life to allow students to witness their court system in action, to humanize the judiciary and judges by sharing stories of personal experiences and general information on decision making, to provide an opportunity for interaction between legal professionals and students in an educational manner, and to make tangible studied concepts such as judicial impartiality.”