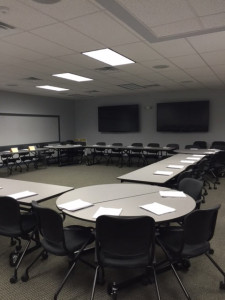 In 2004, judicial education became mandatory for Nebraska judges, probation and Court staff. In 2005, judicial branch education staff were hired, and in 2006 the program was designed and launched. The funding for the mandatory judicial education program came from “dollar filing fees” meaning a dollar from every filing fee received was directed towards the program. The fund receives approximately $374,000 per year which has not been a tremendous budget for growing a program.

The program started with a director, Carole McMahon-Boies, and one clerical staff. Carole’s biggest challenge was to grow the program on her given budget. Because of Carole’s restricted budget, her main education delivery method for Court staff became distance learning. Carole realized she needed more funding to grow and so she reached out to another part of the judicial branch that was untapped – the probation division. Strategically, she knew the probation division received funding from the general appropriation fund. Probation had just begun an ambitious project to implement evidence based practices, and training initiatives blossomed. Once Carole established a firm partnership with probation, far more funding was available. In addition to partnering with probation Carole undertook a new program in Nebraska – Attorney CLE – which became mandatory in 2009. This provided the opportunity to share some resources between programs.

The new Judicial Branch Education Training Center opened in October of 2015 in Lincoln, Nebraska, less than 10 years since Carole took the helm. In its humble roots, the offices for the program were housed in a historic setting, the Supreme Court law library “because nobody uses a law library any more” Carole said. The trainings were conducted in a hotel training space. But because of her fruitful efforts to grow the program, they soon outgrew the space. Now, all the training is housed in the Judicial Branch Education Training Center, including the training done by the Court Improvement Program which provides education regarding juvenile issues. 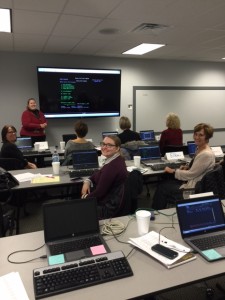 While Carole misses her old historic office setting, she’s enthusiastic about her new modern home equipped with state of the art technology. The training center has four training rooms, all equipped with 90” screen video TVs that are networked but can also operate autonomously, there is a retractable curtain to partition the rooms for quick accommodation, and significant acoustics attributed to the top-notch speaker system.

Another highlight Carole identified in the new training center was the kitchen. Having the kitchen is an upgrade that makes it convenient for all of the probation officers that gather regularly from across the state for new officer training. The officers practically live at the facility for a nine week training in Lincoln. There have been several new probation initiatives implemented by the Nebraska legislature. To give you an idea of the size of the undertaking, there are approximately 220 new probation officers hired in the last 18 months, all of which have gone through new probation officer training through judicial branch education. Other highlights of the building include its live two-way video conferencing capabilities offered state-wide. The building also offers many conveniences to the attending judges which include parking right outside of the facilities (which they didn’t have at their old location) and they have partnered with a hotel right behind the facility so it’s an easy walk across the street to class for those that live in more remote regions of the state.

To give you a sense of the driving force that is Carole, there are a total of 1800 judges and court staff in Nebraska, 109 judges in her state. Those are modest numbers compared to other states. But through her campaign she was able to grow from a staff that included just her as director and one clerical staff to her current fully staffed state which includes a probation education director, a court staff director, four trainers (which includes ex-probation officers and attorneys to do the court staff training), a distance learning specialist, and two clerical staff. Not to mention her instrumental role in delivering a state of the art training center for her judges.

Through this entire process, Carole learned that she needs to find partners to accomplish her goals. No [wo]man is an island and she relied on outside resources. She said “it’s amazing what’s out there and that doesn’t cost anything.” Her advice to her colleagues is “get creative, it’s amazing what you can achieve.”

About Carole McMahon-Boies
In May of 2014, the Nebraska Supreme Court named Carole McMahon-Boies as Administrator for Judicial Branch Education and the Attorney Services Division of the Nebraska Judicial Branch. As administrator for Attorney Services, Carole provides support to the Counsel for Discipline, Mandatory Continuing Legal Education Commission, Nebraska State Bar Commission, and the Commission on the Unauthorized Practice of Law. Additionally, she retained her position as education director for the Judicial Branch providing educational offerings for all judicial branch employees and judges. She has served as Director of Judicial Branch Education since October 2006. Prior to her position with the Court, Carole practiced law for 25 years mainly in the area of labor litigation. Several of her cases were the subject of published opinions in the Federal Circuit Courts and the Nebraska Supreme Court. She is a member of the bar in both Nebraska and Iowa and is admitted to practice before the U.S. Supreme Court. She is a past president of the Robert Van Pelt American Inns of Court. Her teaching experience includes adjunct faculty for many years with Nebraska Wesleyan, Doane College, Union College, and Hamilton College where she taught Labor Law, Human Resource Management, Criminal Law, Contracts, and Business Law.