The conversation regarding the need for judicial outreach in increasing public trust and confidence in the courts is not a new one. In the Summer 1998 issue of the NASJE News, Roger Warren, then president of the National Center for State Courts, said that the court community is well aware of the challenge of public mistrust and that public trust and confidence are the ultimate measures of court performance.

Warren suggested that effective public communication is essential to court performance and said courts should be engaged in informing the public of the structure, functions, and programs of the courts and educating the community about the law and the roles of the courts. 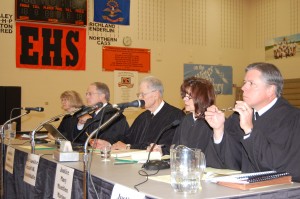 With recent surveys indicating a lack of public knowledge about the judicial system and a growing distrust of government in general, the question today is not whether the courts should engage in public education, but rather how should they engage. For judicial branch educators, a further question is what is their role in public education efforts?

Standard 7.2, Collaboration and Leadership, states that judicial educators should work closely with judicial branch leaders, public information officers, court services organizations, committees, and community partners to develop and institutionalize outreach programs that inform the public, court users, and policy makers about the courts. Examples of such programs include Law Day, the Color of Justice, We the People, teen courts, orientation for new state legislators, and other programs that bring the courts to schools and communities.

Many state court systems sponsor teacher institutes or have developed law-related lesson plans and instructional material for use in classrooms. These programs tie into Standard 7.3, Programs and Materials, which states that judicial branch education organizations should develop education programs and materials that help judicial branch personnel implement outreach programs in their local courts and communities.

According to the National Center for State Courts publication Future Trends for State Courts 2007, recent years have seen a growing recognition of judicial outreach as an appropriate judicial activity. This belief is justified because outreach is needed to promote public understanding of the courts. In 2006, the Iowa Supreme Court took this idea a step further and issued a Bench Order that summoned its judges and court employees into judicial outreach service. Part of the order reads, “For too long, courts have relied on other organizations, such as schools, bar associations, and the media, to shoulder the responsibility of increasing public understanding of the court system. But now more than ever, it is imperative that courts take the lead in enhancing the public’s knowledge about the function of the courts in our democracy, including the constitutional role of the courts, the value of judicial independence, and the fundamental importance of the rule of law, as well as the day-to-day importance the courts have on the lives of all Americans.” The court also said that training should be provided to judges and court staff on public outreach. 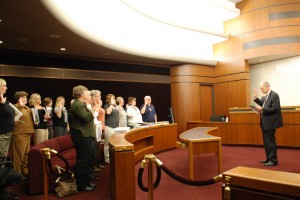 In his opening plenary at the 2007 NASJE Annual conference, Oregon Chief Justice Paul De Muniz said the power of the judiciary comes from the majority of Americans believing in the impartiality of the courts and having confidence in the courts. “Civic education is often seen as external to the courts, but the responsibility resides with us,” he said. “We know how important an educated electorate is and it is up to us to educate the public about the courts.” De Muniz added that judges also have an obligation to be out in the community educating the public, adding that there are tremendous opportunities to partner with others to educate the public, students, and teachers.

It is clear that judicial educators should support judges and court personnel in their efforts to educate the community about the judiciary and its function in society and should also have a role in planning how judicial branch support for civics education is developed. One way to provide support is through offering training for judges and staff related to public speaking, leadership, customer service, teaching, and planning.

An example of this is California, which has developed a curriculum on outreach for new and experienced judges. The goal of this curriculum is to provide participants with the skills and knowledge needed to find an appropriate role in the court’s outreach efforts. It is based on the idea that while not every judge is suited by personality, temperament, or interest to be active in the community, every judge needs to understand the importance of outreach and how it should be conducted. Educational content of such training could include the following:

Another way that judicial educators can support public outreach is through training judges and staff on the use of media. A 2010 report of the New Media Committee of the Conference of Court Public Information Officers calls for collaboration with national judicial associations, including NASJE, to develop a national response to the use of new media such as Facebook, Twitter, and blogs by judges and court systems. Judges and court staff not only need education about new media and how it works, but also on ethical considerations of using media and how to react when things go wrong.

The court’s relationship with the public continues to evolve, but one thing has not changed since our country was founded: Belief in the justice system is critical to public respect for all government. As Alexander Hamilton wrote in the Federalist Papers, “the ordinary administration of criminal and civil justice … contributes, more than any other circumstance, to impressing upon the minds of the people, affection, esteem, and reverence towards the government.” Through judicial outreach and training of judges and court personnel, the courts can continue to play an important role in connecting the people to their government.