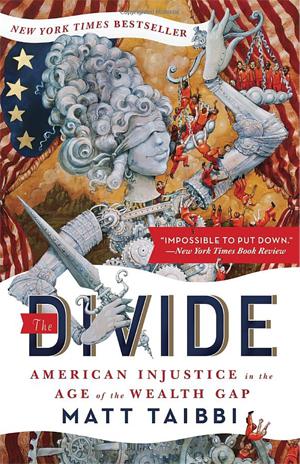 The Divide: American Injustice in the Age of the Wealth Gap by Matt Taibbi
GET IT AT AMAZON

Be prepared to be outraged. 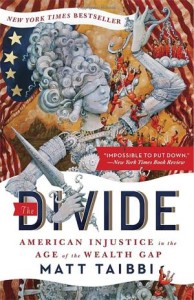 In his compelling book, The Divide: American Injustice in the Age of the Wealth Gap, Rolling Stone editor Matt Taibbi builds a compelling case about inequality in the American criminal justice system, charging that one’s wealth or lack thereof largely affects how one fares in it. Mr. Taibbi demonstrates convincingly how and why Wall Street bankers, traders and hedge fund operators have never been convicted of crimes for their roles in the 2008 recession—and it isn’t pretty. The tableau he paints shows that despite convincing evidence of their crimes, those able to afford expensive lawyers get off without criminal convictions.

On the other hand, the poor are subject to Broken Windows policing and stop and frisk policies that cause them to be detained and subject to search and arrest for no other reason than being there. Welfare recipients are routinely convicted, jailed, and refused future benefits because of errors in the system, and their homes and belongings searched without just cause. Large segments of the minority and poor populations have criminal convictions and/or have served jail time for truly minor “crimes,” or for no reason at all. According to Mr. Taibbi, this happens because they are poor and powerless—and often because of their race.

The picture Mr. Taibbi paints is disturbing, and the information he provides is indispensable. His arguments show diligent and thorough research. He quotes statistics and well-known social science researchers and members of the Justice Department, as well as members of various police forces and the victims and victors themselves. Just when you think you understand the criminal justice system, this book jars you into realizing how much more there is to learn and to work to change.

The Divide is essential reading for anyone who works in the criminal justice system and would be an interesting (and perhaps controversial) Law and Literature or book club selection.

But, be prepared to be outraged.