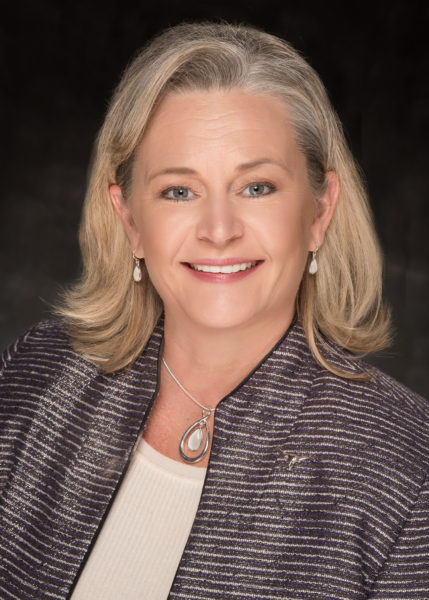 Theresa Ewing is the Director of Municipal Court Services for the Fort Worth Municipal Court. Earlier this year, the National Center for State Courts selected Ms. Ewing to receive its 2018 Distinguished Service Award. This award is presented annually to honor those who have made substantial contributions to the field of court administration and to the work of the National Center for State Courts. I was able to sit down with Ms. Ewing recently and ask her questions about the award as well as her work in Fort Worth.

The National Center for State Courts selected you to be the recipient of the 2018 National Center for State courts Distinguished Service Award presented to honor those who have made substantial contributions to the field of court administration and to the work of the national center. How does it feel to have your name next to those words?
Humbling… Terrifying… It’s beyond comprehension really because as I look back on the people who have received this award in the past, they’re all of the people that I look to as my mentors and my heroes of court administration over the years and to be recognized among the legends is just humbling.

You’ve worked in courts for 28 plus years but you came to Texas in 2016. Is there anything that struck you as different about the way that Texas courts work?
I think one of the biggest distinctions between Texas courts in the municipalities is that this is the first time that I’ve ever worked in the executive branch of government as opposed to the judicial branch of government, and so the relationship factor is so much more important. It really is a mutual relationship on how you run the courts as opposed to the judges [in other states’ systems] dictate how the courts are run and your [the court administrator’s] job is to execute those things. You really do have to have a really symbiotic relationship with your presiding judge in order to make the court function. Before, I’ve always worked in an institution where your chief judge gives the directive and you’re required to execute that. It’s a very different dynamic knowing that there’s not a direct report, but there must be a relationship in order to make the court work most effectively.

What are you most proud of about your work with the Fort Worth court?
There are so many things I’m proud of.  My most proud moment is, of course, we instituted warrant forgiveness month which was a success beyond what any of us could’ve ever imagined.  I think one of the other big undertakings is our cross-training and our actual certification of staff in the TMCEC certification levels because that had not been anything that had been previously pursued. We had staff working in silos and bubbles, and didn’t understand the impact of their jobs versus what happened next in the process. So really pushing to get that education piece done and developing leaders in the future courts—that is really what we should all be doing.

What do you think is the biggest challenge to court administrators you’re so close (either current or coming challenge) that they have to deal with in Texas municipal courts.
I think it’s not just Texas municipal courts, but nationally, is really engaging the public in relevancy. Why are courts relevant in this day and age when there are so many different alternative methods of dealing with disputes? We talk about ADR. We talk about putting pretrial services in place. We’re trying to put different modalities in place, but trying to get people to remember the courts are the neutral party you can go to. Just because you’ve been accused of a crime doesn’t mean that that’s definitive. People forget that’s why we have we have courts. We have courts because they need to have a place they can come to a neutral arbitrator that can say, “State, you did your thing, now I want to hear the other side of the story.  Did you do your thing right? Let’s put it together and let’s make a final decision.” That’s why courts exist. And we are forgetting that that’s why we exist even at the municipal court level where we see thousands upon thousands of people that have an opportunity to come to a neutral arbitrator. So education and relevancy, for us, has been a big push because if people don’t understand that that’s the role of the court, that’s where you get fear. That’s where you get noncompliance because they’re afraid to come in and talk to us.

For municipal courts week, we had three different sets of groups come in and do mock trials with us. We had young men and women in high school and junior high walking through metal detectors scared to death about the fact they were coming into a court and they could not believe that we were “nice.” Judge Rodgers and I had an opportunity to talk to all of the groups and say this is what we do with and this is why we exist and have a conversation about judicial versus nonjudicial and the role that the clerks play in the way that justice is administered.

Judge Rodgers and I will say “Does everybody have to be a lawyer to be in the court?” And, of course, most of the kids are kinda like “yeah” Because there are so many roles (non-attorneys) that get performed that actually support the judicial branch and the judicial functions that nobody realizes. With the stroke of a keystroke, we can put people in jail.  That’s why we’re so important, that’s why it’s so important to distinguish—I am not a customer service rep. I work for a court. I have the opportunity to help in the administration of justice.

Congratulations to Theresa Ewing on receiving this tremendous honor! Under the leadership of Theresa Ewing and Chief Judge Danny Rodgers, the Fort Worth municipal court is doing great work, and it is wonderful to see this national recognition bestowed upon one of Texas’ own.