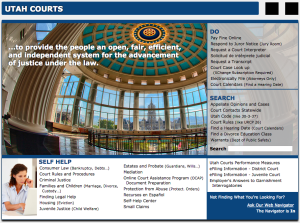 The use of technology has become progressively more important to the efficient operations of courts nationwide. In Utah, the administrative office of the courts began seeking ways for the use of technology to increase court efficiency as far back as the early 1990s. Through the IT department, the courts began implementing projects designed to improve court data and the ability to digitally submit and store documents. They have now successfully implemented a structure allowing almost all civil and criminal cases to be filed electronically.

When the world-wide recession hit in the mid to late 2000s, all state courts felt the impact. Filings increased, yet budgets were being cut and every court system struggled to find ways to do more with less. The governing body for the Utah courts, the Judicial Council directed the administration to implement a paperless way to file citations and cases. A deadline of April 1, 2013 was given for civil cases to be entirely electronically filed. After other incremental deadlines for domestic and probate matters, by January 1, 2015, all criminal cases were to be electronically filed by rule, (UCJA Rule 4-503).

The court’s IT department has had two full-time employees working on e-filing for at least 10 years, and throughout that period, additional staff have been added to the e-filing project, and hundreds more employee hours have been exerted to meet the needed deadlines.

It is now mandatory for attorneys to file cases electronically, reducing the need for paper filing systems and clerk labor for manually filing entries. The only sources not using electronic filing systems are self-represented litigants. Programs for assisting these litigants with educational resources and support are currently being studied.

A committee has been following the progress of the e-filing program, measuring progress, calling attention to problem areas, and promoting statewide consistency of usage. So far the data is reflecting an overall reduction in clerical labor costs of somewhere between eight and sixteen percent state-wide.

With results like this, the Administrative Office of the Courts in Utah will continue to look for new, innovative ways to use technology to create higher efficiency and say goodbye to old ways of doing business.